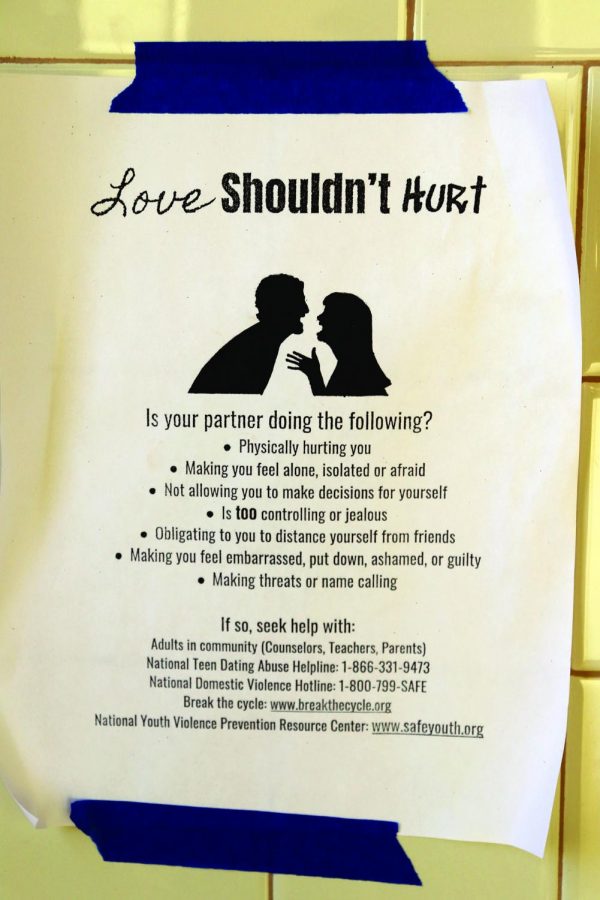 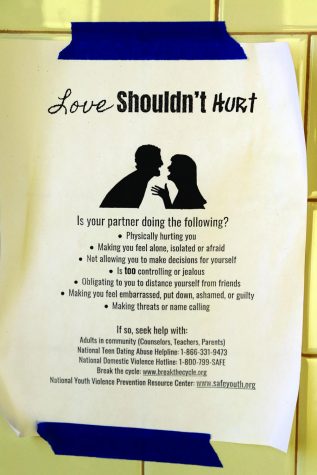 High school: the glorious four years of homework, sports, clubs, and relationships. When relationships are brought up, it usually doesn’t mean domestic violence; however, dating abuse is more common than you think, but it is kept quiet just like other pressing issues.

Teacher Amy Irwin’s Family Living class has been learning about how to approach dating abuse. Irwin said, “We use this curriculum called ‘safe dates’ that was actually put on by a company that was founded by parents whose daughter was killed by her boyfriend. The purpose of this curriculum is to identify what healthy relationships look like what to do if you are in an unhealthy relationship and what are the red flags. Our main goal is to determine how you can help someone in this situation.”

Her class wants to share their knowledge by informing the school on what to look for in a relationship that could be red flags. Girls have put up posters in the bathrooms to bring awareness and help to those who need it. Even if dating abuse doesn’t directly apply to most students, it could affect a friend or next door neighbor. Bystanders play an important role, and should know how to deal with dating abuse. Lexi Tucker (19), a student in the family living class, said, “I knew it was going on, but it opened my eyes more to if that was happening to a friend what to do, and how to handle it. There are certain red flags that you should listen to. I learned you would have to approach this situation differently for each friend, and it taught me how to communicate more, so it showed that communication is really important.” People need to talk to whoever is causing these problems, and make them aware of what is going on.

Their work has not gone unnoticed. Sara Westerman (20) said, “At first I thought they were directed towards one person and one generalization, but I think it is a good way to bring awareness to this situation because some people need to see those posters to realize that they are not in a good relationship.”

Keri Gerkin (22) said, “I think it’s pretty cool how girls are standing up for each other, and saying if you need to speak out then speak out instead of holding everything inside.”