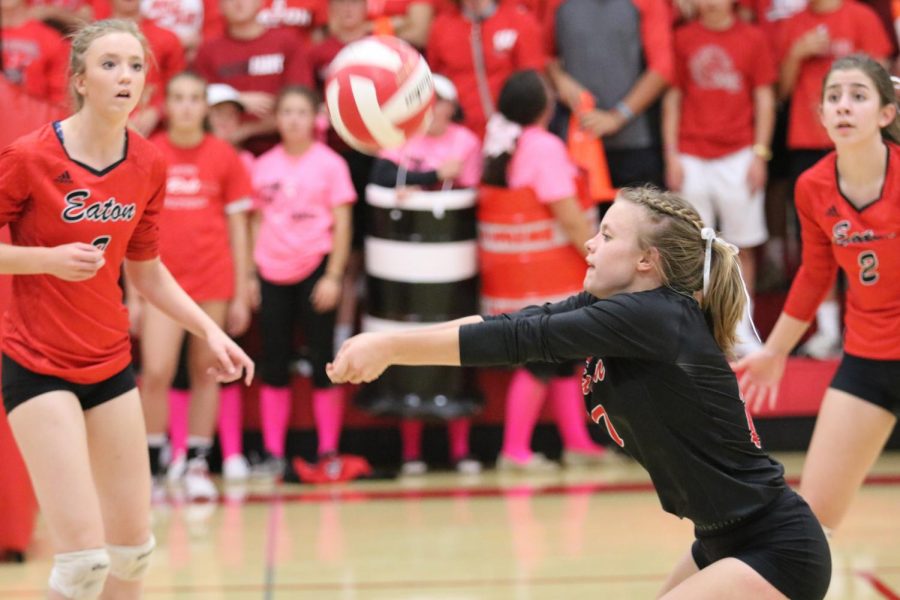 Lady Reds proves to state why they are the best
The 8-5 Reds volleyball team continues to show its dominance across all of 3A Colorado after another sweep against Frontier Wolverines and the University Bulldogs. The Reds have no loses to a 3A team, Eaton’s only loses have been to three 4A schools and 5a Denver East. In fact, against all 3A teams, Eaton has yet to lose a single set. Senior leaders Quinci Johnson (19) and Makenzie Harris (19) lead the team with a total of 281 kills out of 692 attempts, a 40 percent kills to attempts. To help the senior leaders, Megan St. Jean (22), and Delaney Ochsner (21) have combined for 29 aces.

With a strong start to the year coach Forester said “It’s definitely a different year with different players. Every team has its growing pains and for us we continue to try to find us and who we are.” Forester also said the girls have the same goal “but realizing it’s going to have to be a little different.” With many tough games left in the season, Johnson (19) said the Reds are focused on “just taking care of 900 sq feet and doing what we do best.”

Reds volleyball has only two games left this regular season against Platte Valley, and Sterling. With the state tournament approaching on November 8 the Reds are looking to perfect their season going undefeated in 3A to secure the number one seed going into the tournament.

To help reclaim the number one-seed in the State, the Reds dominated a tough University team with their star Abby Schaefer (19) that were also undefeated. On October 4, for Eaton’s homecoming the two rivals battled for the advantage in the state tournament and to help win the Patriot league conference.