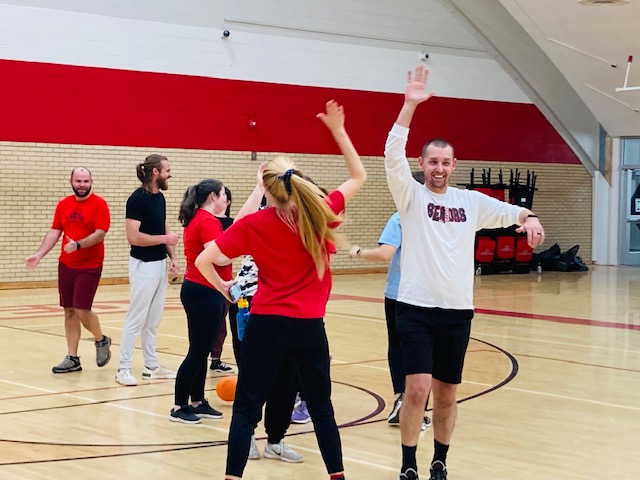 Family, Career, and Community Leaders of America (FCCLA) hosted a dodgeball tournament. On Tuesday, March 15 community members and students got together to play in a dodgeball tournament and raise money for charity. All the money raised was donated to Coffeehouse Ten24 in support of helping human trafficking victims. It was $50 for a team or $5 per person to participate in the tournament. Open donations were also collected at the door for those who wanted to donate but not participate. Emily Hogsett (22) said, “The tournament was successful, because of the money we raised. I wish that there would’ve been more students there, but we worked with what we got.” Overall, FCCLA raised $407 for sex trafficking victims.

A total of five teams participated in the tournament. There were the Killer Bees #1 and the Killer Bees #2, which were made up of teachers from Benjamin Eaton Elementary School (BEES). The Dirty Dodgers was a team of EHS teachers. The Sigma Males and Fearsome Rubber Duckies were both EHS student teams. Each team played each other two to three times. To move up in the tournament, a team had to win two of the games against the other team. Eventually, the Sigma Males and Dirty Dodger went to the championship. The Sigma Males won the dodgeball tournament championship. Chemistry teacher, Stephanie Kirchhoff thought the event was fun and would do it again. Kirchhoff said, “The interaction with the kids and the teachers brought back memories.” Everyone who participated in the tournament had a great time and did a great job raising money for an important cause.