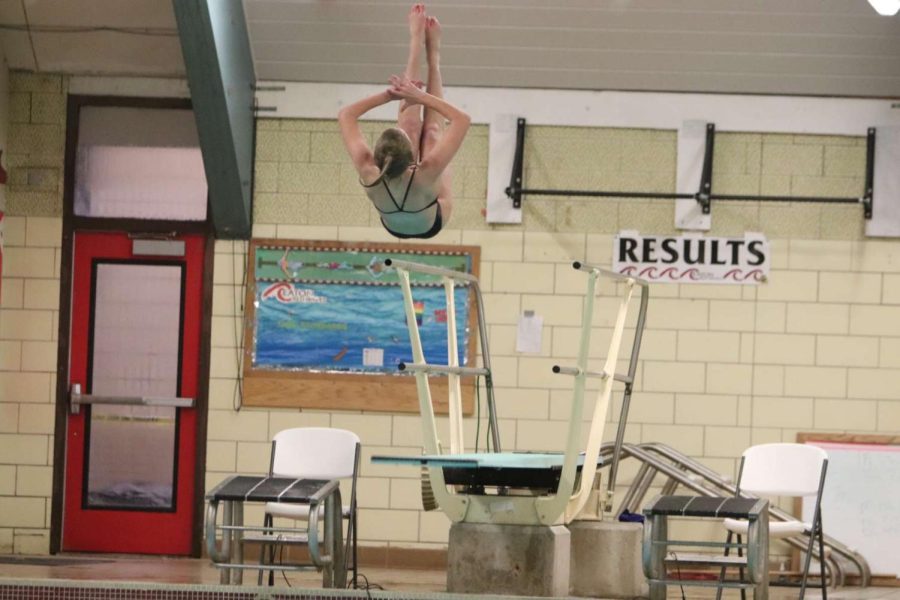 Maddux Chapman (25) during her dive.

Maddux Chapman (25), a diver for the Lady Reds Swim team, qualified for diving at the Wiedeman Invitational swim meet. Many other girls are also very close to qualifying as well as they are almost a second or less off of the qualification time. Coach Hattie Carlson, the Eaton High School Girls Swimming head coach said, “Swimmers get a big rest at the end of the season in hopes of seeing huge improvements at our championship meets,” which is well deserved after very competitive and stressful practices to meet the requirements.

The Wiedeman Invitational was an open meet, which means that more than one team would be competing there, and had a turn out of eight teams. Open meets have more competition which is good for the girls when trying to meet state qualification times. Lexi Bruntz (22) placed third and qualified for state in the 100 Free with a time of 00:59.10 and the state qualifier time as 01:01.50. In the 50 Free she received seventh place and qualified for state again with a time of 00:27.54, with the state qualification time set at 00:27.80. With this being her last year she is representing Eaton High School extremely well. “I’m super excited to go and compete at state this year. It means a lot because this will be my last state swim meet. It is a bittersweet feeling because I’m proud of all that I have accomplished in high school swimming and I really don’t want to fully say goodbye to it. But, I can’t wait to see what the future holds for me,” said Bruntz.

Caitlin Morgan (23) will also be attending state as she qualified with the time of 01:16.48 in the 100 Breast, with the state qualifier time set at 01:20.50. She also beat the state qualifying time of 02:36.00 in the 200 Individual Medley, with her own time of 02:34.64, receiving fifth place. “It’s super exciting to be able to qualify for state again. I’m just glad I got my times from the start instead of having to chase them down like the last two years. We have such a good group of girls and we should continue to get better and be ready to compete well at state,” Morgan said, in which she hopes more girls will qualify for state during the last couple meets of the season before state.