Creating an environment where everyone is valued 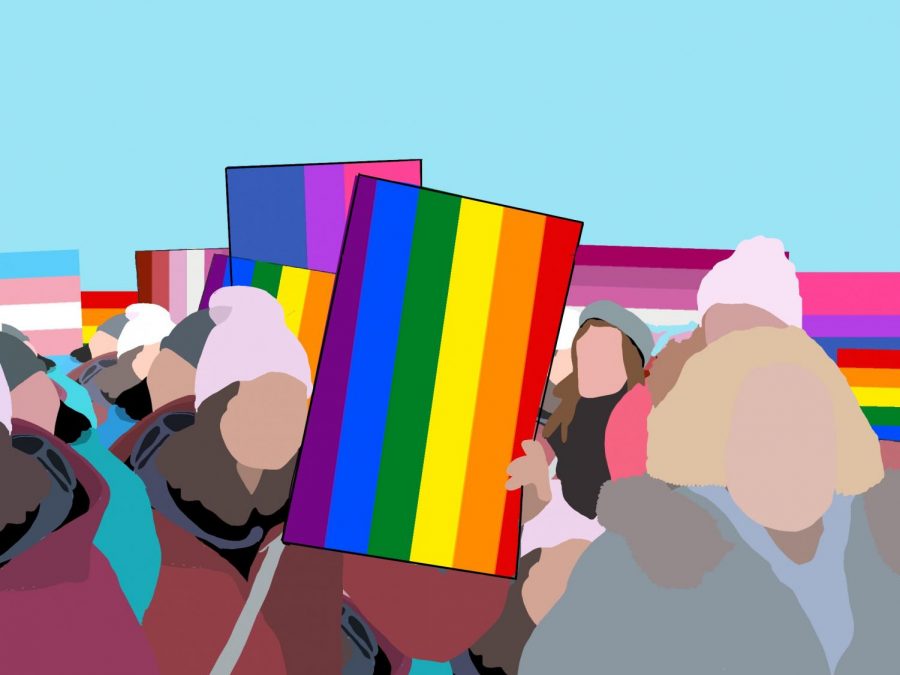 “Fostering a sense of belonging and connectedness in school is crucial for putting all students on a path to success,” (GLSEN). High school is an imperative time in young teens’ lives. It is a chapter of self-discovery and growth. As young adults explore their identity, an inclusive environment is important for academic success. Creating an accepting school culture for students of every sexual orientation, gender identity, and gender expression ensures each student feels valued and safe. “LGBTQ+ youth experience bullying at significantly greater rates than their straight and cisgender peers,” (The Trevor Project). The Trevor Project conducted a ‘National Survey on LGBTQ Youth Mental Health 2021’ in which they recorded the experiences of 35,000 LGBTQ youth across America. This survey found that 42% of LGBTQ youth seriously considered attempting suicide in the past year, including more than half of transgender and nonbinary youth. Comparatively, transgender and nonbinary youth who reported having pronouns respected by the people they lived with and their peers attempted suicide at half the rate of those who did not have their pronouns respected.

LGBTQ+ advocate, GSA advisor, and art teacher Chandler Herbst said, “As a staff member in a high school, my goal is to help all of my students succeed in whatever they set their minds to. In order to achieve that success, it is important that they feel safe in their environment. Children and teens that identify as members of the LGBTQ+ community are one of the highest demographics that receive hate or are bullied for being different. They feel isolation both in and out of school. As a result, they are at higher risk for developing mental health issues and in turn are at a greater risk for committing suicide.” Outspoken teachers like Herbst play a vital role in changing a school culture for the better. While LGBTQ+ issues are a controversial topic in the media currently, human rights are not political. “One of the biggest issues facing our community is micro-aggressions from both students and staff. While direct bullying does occur, members of the community are more likely to hear underhanded comments that may not be intended to harm but in fact, do. Comments like “that’s so gay” insinuate that being gay is a bad thing and makes members of the community feel guilty about who they are. I think the staff could benefit from unconscious bias training where they learn about microaggressions in addition to how to create a safe space in their classroom. The more that we are all aware of different lifestyles, the more normalized it becomes and the less targeted students a part of the LBGTQ+ community will feel,” said Herbst. Encouraging allyship among straight and cisgender students will translate directly to overall student success. If students feel comfortable in their school environment they can better express their diversity and identity as a young adult.

A small but impactful way to support transgender and nonbinary students is using their preferred name and pronouns. Herbst said, “Respecting someone’s pronouns and change of names is no different than if a student preferred to go by a nickname as opposed to their full name. You are simply referring to someone by something that they prefer. When students state what their name is or what their pronouns are, it is in an attempt to reclaim their identity; an attempt to have their outward appearance and name represent what they feel on the inside. It is one of the first steps taken to feel like they are in control of their own identity. Calling someone by their correct pronouns or preferred name is validating their identity. While I understand it can be hard and confusing for students to suddenly go by different names or pronouns, I just urge people to recognize that that same frustration is felt by members of the community for not feeling recognized or respected.”

GSA president Feliz Martinez (22) said, “Using correct pronouns is important because it helps students feel comfortable in their own skin and identity in the real world.” The word ‘Pride’ holds a lot of value and meaning to LGBTQ+ individuals. It celebrates their freedom to embrace their individuality in a world that hasn’t always allowed them to do so. Herbst said, “To me, Pride means feeling comfortable in one’s own skin; to be confident in one’s identity so that there can be more focus put on the choices we make and how we interact with the world around us. Every student deserves to be proud of who they are without trying to force their own beliefs, identities, or lifestyles on others. In the community, pride just means being happy with who we are because we have spent much of our lives being told not to be because it is wrong. We are not trying to force anything on anyone, we just want the same validation that each person seeks in our own lives.”

Students and staff at Eaton High School can transform their school culture by setting their own biases aside to support and uplift every student. Scarlett Wray (22) said, “Allyship for LGBTQ+ students lets them know that you’re truly there for them when other people aren’t. It is heartbreaking that not everyone is an ally to these students, but I do my best to let them know even though I do not identify as an LGBTQ+ member, I am still there for them and support them.” Once every student feels a sense of belonging and safety in their environment, more attention can be paid in classes and they can ultimately focus on their own goals.