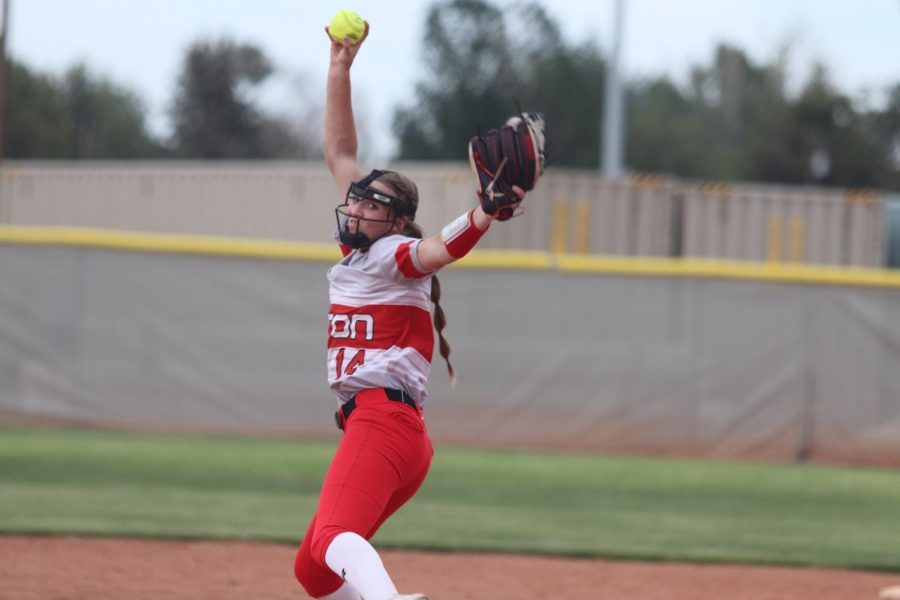 Julia Meagher (24) is in motion ready to deliver a pitch.

After taking a tough loss to Strasburg in their first game on August 24, losing 7-10, the Reds battled their way back, taking the second game 8-0. After increasing their win streak to seven games, the win also increased their record to 12-3.

Kiuana Smith (25) said, “The win against Strausburg gave us a good amount of momentum and confidence because we wanted to go into that game and prove that we could beat them. Now we can just protect our record so that we will be in a good spot for the tournament.”

As a whole, the Reds stepped up on defense with a team total fielding percentage of .963 having only one error on the day. One of Eaton’s pitchers, Julia Meagher (24) said, “Having such a strong defense is honestly such a big weight off of my shoulders when I pitch. It allows me to pitch with no fear of what may happen if a pitch gets hit. I can relax in the circle and just do my thing knowing that my defense behind me will do their jobs.”

The Reds’ defense was alive in the win versus Strasburg and so was their offense. All together, their batting average was .400 racking up 12 hits, 5 RBI’s, and 8 runs. Smith showed up and had a day for the Reds’ offense. She went three for four in the game with a double and two singles. In those three hits, she drove in two of the Reds’ eight runs.  In a big game like this one, she knows that she has to do everything that she can to help the team win. She said, “Going into the game I just had the mindset that I was going to be disciplined at the plate, and if I got a good strike then I’d take it to right field.”

Emma Pinkstaff (22) also led the way for the Reds at the plate. She went two for four at the plate with two singles. She also scored two runs for the Reds and picked a stolen base. She is leading the 3A Patriot League in stolen bases with 24 on the year and she hopes to keep that going. She said,  “I mean every stolen base is one step closer to scoring. It also puts me in a better scoring position and honestly can be the difference in winning or losing a game.”

Sadie Ross (24) had another great day in the circle. She faced just 25 batters and struck out 14 of them. She gave up only one hit while walking just one. Both appearances in the circle have resulted in shutout victories for the Reds.