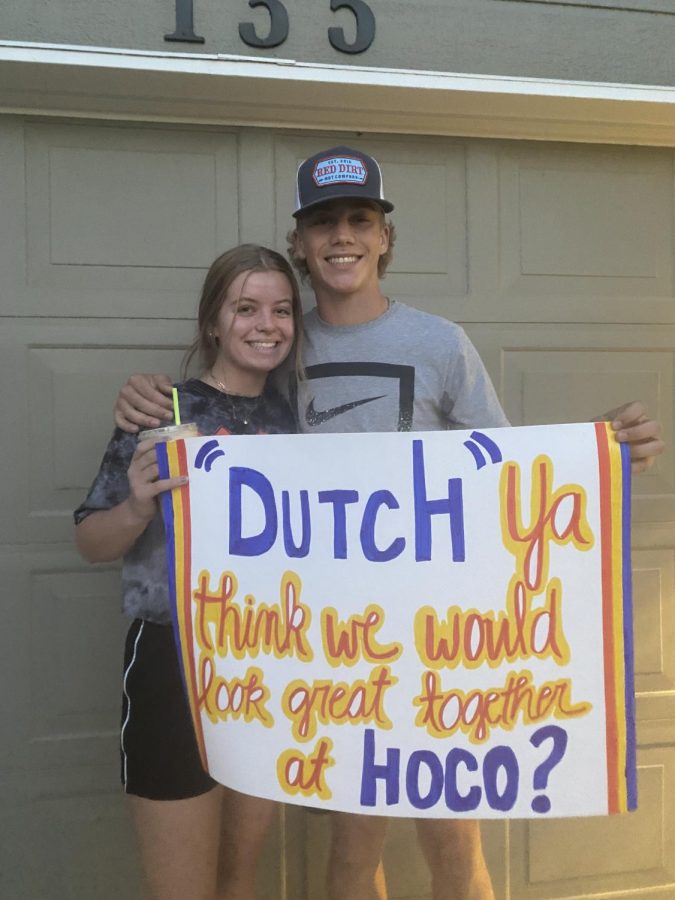 Kylie Schumacher (23) got asked by Walker Martin (23) on Sunday evening. The sign was inspired by the famous “Dutch Bros” coffee shop that teens go crazy over. The sign said, “Dutch ya think we would look great together at HOCO.” Followed by Schumacher’s favorite Dutch drink. The proposal ended up being a success. Schumacher said, “I thought that the sign was very creative, usually when boys ask there isn’t much thought or effort put into it, but I thought Walker did a good job.” As the dance rolls around, the boys are having to quickly come up with sign ideas before they are considered “overused”.

When planning Homecoming proposals, many different things come into play whether that be figuring out what the girl’s

favorite hobby is or favorite candy, Zach Maske(24)  took the route of asking by using his date Madi Fishers (24) favorite hobby, running. The sign said, “I would be eXCited to go to Homecoming with you!” Different platforms like Pinterest, Instagram, and just a simple Google search have inspired these boys to make unique signs.

Another popular proposal was a track and field inspired sign. Dakotah Braucher (23) and Andi Rassmusun (24) are both very dedicated to running as they both run cross country and track. The sign says “ Andie, I’ve lost track of how many times you’ve run through my mind… Hoco?” Braucher said, “ I wanted to be original because a lot of times guys can do the same signs over and over, and I have never seen this one done so I decided to go through with it.”

The Homecoming dance is this Saturday from 8pm to 11p

m the tickets for singles are five dollars and couples are eight dollars.