Eaton completes the sweep against Brush 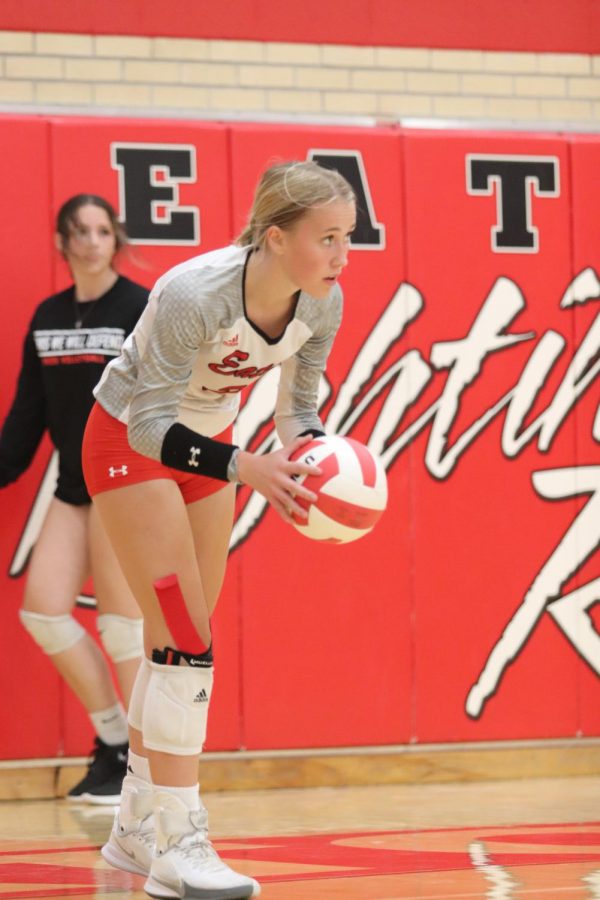 Eaton volleyball completed the easy sweep against the Brush Beetdiggers on the road.

On Tuesday, the Reds hit the road and took on the Beetdiggers and in three sets turned around with a victory under their belts.

Set one began with a quick 25-13 win where the Reds were led by Emily Maske (23) and Rylee Martin (23) in kills where they each had 8 in the match.  They started the game strongly and didn’t let up.

In the second set, it was much of the same with another blowout: 25-11.  Not only did Martin lead the team in kills, she also led in assists with 13.  Martin said, “I’ve had to step into a new role this year where I am setting, hitting, and some serve receive rotations which are new for me, but exciting.”  Megan St. Jean (22) also had 13 assists in the game, she said, “ As a senior, I feel like one of my biggest roles is creating a culture for the rest of the program. How you act in practice and how much effort you put in is actually what incoming freshmen will see. You’re responsible to show your athletes what it means to work hard and be a part of Eaton volleyball.”
Defensively for the Reds, Graci Tomlinson (23) led the team in digs with 13 and was followed by Kylie Schumacher (23) who had 11 in the match. Schumacher didn’t only play defense, she and Martin led the team in serving aces with 6 each.

The third set sealed the deal with a score of 25-18 and propelled the Reds to 4-3 on the year.  The Beetdiggers are now 1-8 on the season after the loss to the Reds.  St. Jean said, “We individually are all very motivated at what to do well, but communication and how we recover after a bad play is critical.”

The Reds now over a .500 win percentage look forward to their next opponent the Lutheran Lions. Martin said, “They are always a tough team and well-respected in the volleyball community.”  The girls will be on the road again on Thursday, September 16.

The Lions are 7-1 this season with their only loss to T.C. Williams from Alexandria, VA in a tournament.  “I think a big win against Lutheran is awesome, but the team is focused on the bigger picture of constantly growing our game and connections. Success inside the team is more important than the stats.” St. Jean said.