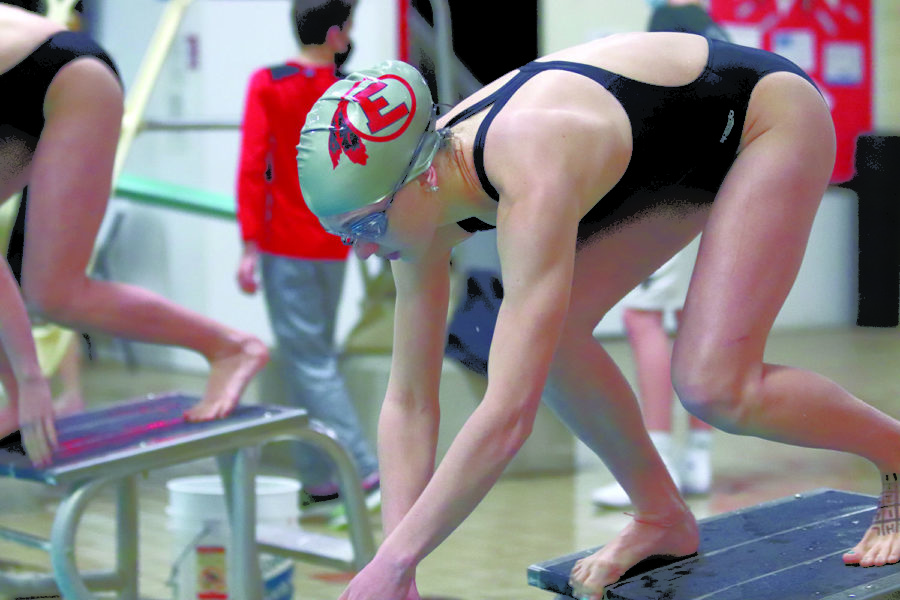 On Friday, Feb. 19, Eaton High School’s girl’s swim team came up victorious in their home meet against Holyoke High School with a final score of 89-81. The Lady Reds are crushing the competition this season with Lexi Bruntz (22), Caitlin Morgan (23), and Kaiya Sinkler (23) as the top score holders. There are also a couple freshmen that joined the team this year that have a lot of potential. Coach Hattie Carlson said, “Andie Rasmussen (24) has a lot of talent for only diving for a few weeks and is also a freestyle swimmer.” In the girls 200-yard medley relay Eaton placed in the top three, with first place including Aubrey Ledall (23), Addie Burke (22), Kaiya Sinkler (23), and Cadynce Campbell (21) with a time of 2:31.48. This past meet at home was Coach Carlson’s favorite swim meet this season. The conference is different this year compared to others with several small teams and one larger team. With the smaller number of teams, this means that the Reds either crush their competition or their competition crushes them. Coach Carlson said, “To not know what the outcome is, it’s a lot more fun.” With a population of 2,484 people, Holyoke has a swim team relatively close in size to Eaton’s swim team, so they are a perfect match to compete against each other. In that case, the two teams usually score a couple of points within each other. In the girls 200 yard free, Lexi Bruntz took first place with a time of 2:07.92 and the girl behind her at a 2:14.57. She said, “Holyoke is always good competition because their team is about the same size as ours, so the duals are always pretty close. But as a team, we did really well. We have a few new girls this year who have never swum before and they are doing amazing.” As a new swimmer, Rasmussen said, “I am really liking swimming. It’s really nice to be able to try a new sport and to learn a new skill. I think my favorite event so far is the 50 freestyle but I also really like the 100 breaststroke.” The up perclassmen are very helpful when it comes to encouraging and welcoming the freshmen girls. They spread positivity and motivate the girls during workouts to help improve for competitions. “The competition was good. They had some fast swimmers, but we weren’t scared. As a team, we swam really well. Lots of people had best times and fought hard until the end to win the races,” said Caitlin Morgan, who also held first place in the girl’s 200 yard individual medley with a final time of 2:33.35. The swim team also consists of divers and Kaiya Sinkler is one of the top, receiving first place for the girl’s one meter diving with the final score of 159.00. Once again, Lexi Bruntz received first place in the girls 100 yard freestyle with a final time of 58.33. Coach Hattie has been coaching at Eaton High School for a long time and loves to watch the girls grow throughout the seasons. Carlson said, “It was really fun to actually see the girls get out there and race somebody who is close to them.” Eaton had a lot of first places and the Lady Reds won the coach’s favorite swim meet, which always makes a great victory.