Wrestling is victorious at Patriot Cross Over Dual

Reds battle Valley with Regionals and State around the corner 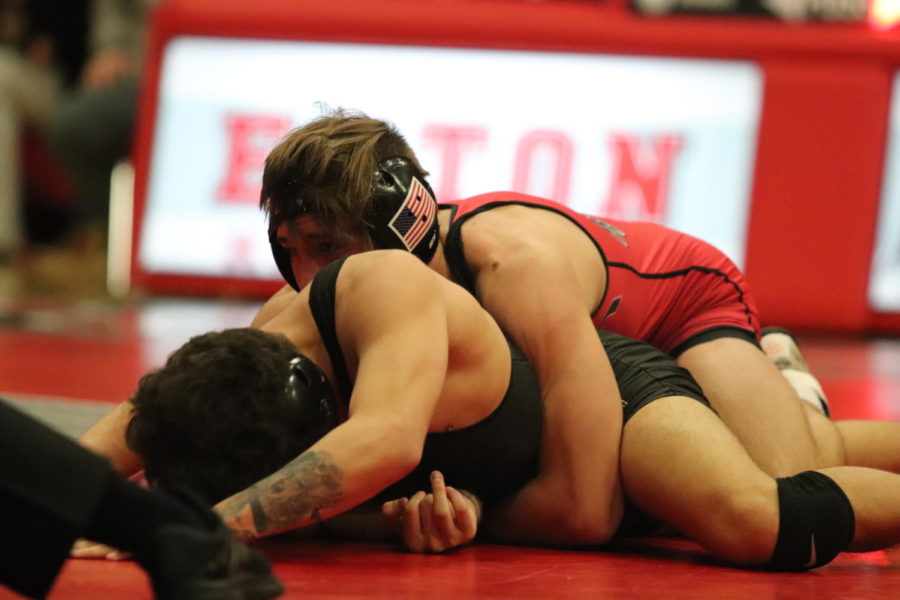 Eaton’s 2021wrestling season has been off to a stellar start.  Practices began on Jan. 25 with competitions beginning the first of February.  Since then, the Reds have battled teams from all over the state.  Recently, the Reds hosted the Patriot Cross Over Dual against their rival: Valley.

The 2021wrestling season has had many adaptations due to COVID-19 for the Reds.  “It has kind of been a headache,” Head Coach Tony Mustari said. “The steps and things we have to keep track of, making sure kids are wearing their masks when they are not wrestling, and social distancing when we are on the bench at opposing schools or other places.  It just makes it hard and adds to the list of things we have to keep track of during the season.”

Jordan said wrestling “teaches you hard work,” and his advice to younger wrestlers is, “It’s worth it in the end, but it’s pretty rough at the start.”  Jordan wrestles in the 182-pound division.  Against Valley, Jordan wrestled Viking wrestler Jeff Gore. Jordan overthrew Gore for the win.

The Patriot Cross Over Dual brought the Reds’ rival to their hometown for a matchup of last year’s State Champions. Eaton overcame the Vikings with a toppling score of 41 to 33.

Prior to the Reds’ battle against Valley, they were ranked third behind Valley and Pagosa Springs.

Regionals will take place March 5 through 6. Head Coach Tony Mustari said, “Instead of splitting up the tournament within two days, certain weights are finishing up in one day.”

As the wrestlers tackle Regionals, Eaton has high hopes for the end of the 2021 season, especially since 2020 ended in a championship for the Reds.  Along with the team’s success in 2020, Dirksen won his weight division to take home a state title. As for the 2021 season, Dirksen has won all but one of his matches, leaving him with a 14-1 record, and he is currently ranked 2nd in the state in the 3A 152 pound division.

“I definitely think we are capable of winning State again,” Dirksen said.  To get to State, Dirksen said wrestlers need to focus on the “quality of their wrestling.” He said, “It is stepping up and seeing who has the bigger heart – especially last year when I was going into State.  You have to have the mentality of who you want to be and how you want to come out of the tournament.”

With State quickly approaching, Eaton is hoping to end the season on a high note with another title in hand. As they keep knocking down opponents and rivals on the road to State, the 2021 wrestling season could be even better than the 2020 season for the Reds.