Seniors start to carve out the paths for their future 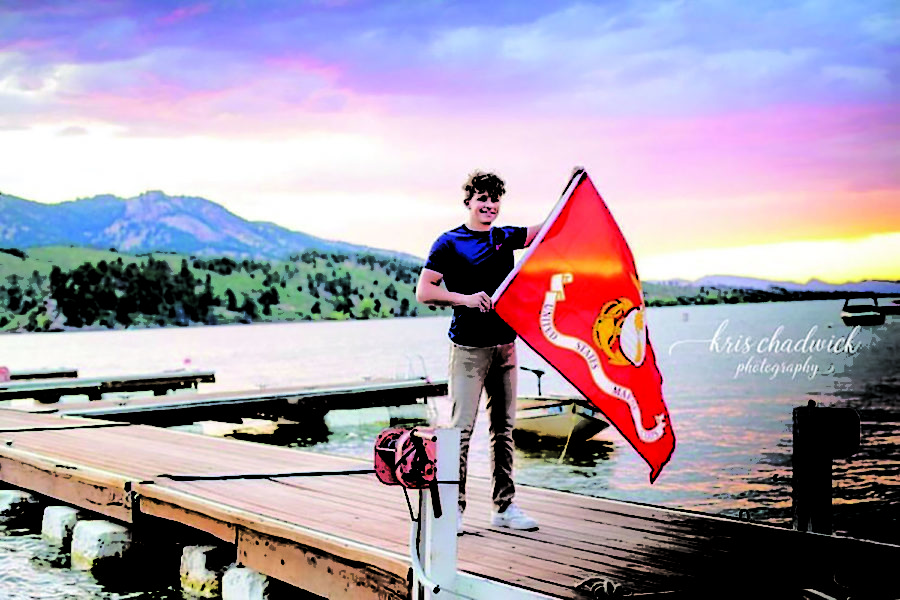 The 2020-2021 school year is coming to an end and the seniors have started to plan their future after high school. Students have already planned out the colleges they would like to attend, what they want to be, and where they want to go. The 2021 class has come a long way and they are now starting a new chapter in their lives. Several seniors are prepared for their future and some are even ready to break out of their comfort zones, such as Sarah’Cate Ogden (21). She said, “I am going to miss my friends dearly and I will miss some things about my life right now, but overall I am excited for college.” Nakiaya Kuskie (21) recently signed with Doane University in Nebraska for basketball. She has played on the varsity team since freshman year and is the shooting guard. Nakaiya has made it to the final four and has broken three highschool records. She plans on majoring in Psychology and becoming a Psychiatrist. Delaney Ochsner (21) signed with Western Colorado University in Gunnison. She signed for volleyball and wants to study Biology to become a sonographer. Ben Williams (21) decided on Montana State University and is going to major in Fish and Wildlife management. He then wants to become a wildlife biologist. Sydney Carlson (21) plans on going to Aims Community College to get a radiation technician’s associate’s degree to become a radiation therapist. Her other plan would also be to go to a university and obtain her bachelor’s degree and also pursue a career in radiation therapy. Sydney Leffler (21) signed with Colorado Mesa University for volleyball. Her position is outside and she is the captain of the high school team. Sydney has received an all-conference and had an all- state honorable mention in 2019. She is going to play indoor and beach volleyball while majoring in biology. Marco Rodriguez (21) plans on being an Infantryman in the Marine Corps. He wants to serve and defend the country and is excited about boot camp and traveling the world. Liam Hernandez (21) is also going into the Marine Corps for at least four years to follow the footsteps of his dad and grandpa. While in the corps he wants to become a diesel mechanic. Grace Smith (21) wants to become a Spanish teacher and spend lots of time studying abroad. Emma Blaskowski (21) plans on going to the University of Kansas to study sports management with the combination of the pre-law program or a business degree. Her goal is to be a sports lawyer or an agent. Mackenna Dalton (21) wants to go to Grand Canyon University in Arizona to get a bachelor’s degree in nursing. She wants to then be on a medical mission team. Jennifer Jarnagin (21) plans on going to the Colorado School of Mines in Golden to major in chemical engineering. Evan Gesick (21) plans on going to Hope International University in California on a cross country and track scholarship. He wants to get a business and management degree which he plans on using to own or manage a large business. If not, he has a backup plan of being an electrician. Miranda Crisp (21) has the plan to go to Laramie County Community College to study Agribusiness and then transfer to Texas Tech or Tarleton State. At one of those, she plans on majoring in agricultural education with an agribusiness emphasis. Her goal is to be an agriculture teacher at a secondary school. Kylie Kayser (21) has her heart set on Oklahoma State University and wants to major in Agriculture Communications with Agriculture Business. Becca Doughty (21) is going to enroll in the Coast Guard and she wants to see where it takes her. Jadon Johnson (21) plans on going to the University of Pittsburgh to study pre-law. Then he plans on using that to be an activist for civil rights. Catelyn Adams (21) wants to go to Northern Arizona University or Colorado State University but then wants to become a missionary nurse or pediatric nurse. Tanner True (21) has recently signed with Chadron State University in Nebraska for football. He plans on playing football there and majoring in biology for his undergraduate. After that, he wants to get into Physician’s Assistant school and become a physician’s assistant. Scott Grable (21) also recently signed for track and field at Western Colorado University. With their futures planned out, the seniors look forward to life after high school. Other students are going to miss high school and all the memories. Kyleigh Kieler (21) said, “Winnie-the-Pooh said it the best when he said ‘how lucky am I to have something that makes saying goodbye so hard.’ But the end of one thing is only the beginning of another and even though I will miss what was, I will look forward to what will be.”