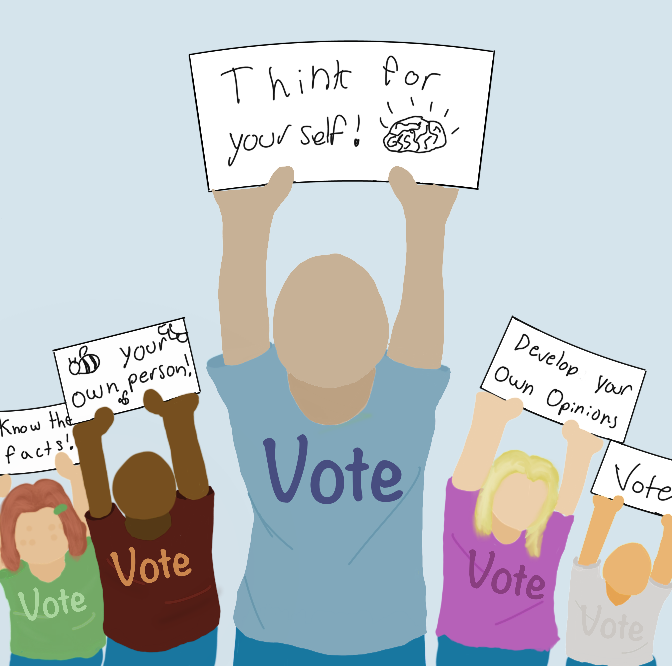 As the 2020 Election is rolling around the corner, obviously people are going to express their political views and make sure that the opposite party is hearing their voice.The Red Ink staff recognizes the importance of creating personal beliefs and political opinions and think that it is very important to create your own political opinions. In order to get involved it takes strength and boldness.

Of course, the majority of the school is not of voting age, but it is still important. It is so beneficial to use your voice because as a citizen of the United States, according to the First Amendment every American has the freedom of speech. Your voice can have a huge impact on who our next leader will be and that is a huge responsibility. Knowing what is going on in the government is vital to creating your own opinions and as the election rolls around, to further understand what Trump and Biden are talking about it’s important to educate yourself.  Opinions can be influenced by several factors, for example, a major influencer is parents. Voicing your opinion requires you to be bold which can build character.

Parents are the ones we always look up to and follow in their footsteps but, if you don’t have the same political views as your parents that is okay. Kids are taught to always agree with parents so the thought of having a separate opinion from their parents can be very scary. Not only is it your human right to think your own personal thoughts, it can strongly impact the future generations because you have unbiased opinions. Having your own opinions and being involved in the world can make someone more understanding, thoughtful, and a more well rounded person. Following purely your parents beliefs can blind you from facts that may be important. The election may seem like a popular trend for people who haven’t been exposed to what is happening in society right now. Social media is a great way to get involved. Instagram, Snapchat, and Tiktok are great platforms to collect important data about politics. Looking for unbiased information is vital to creating strong and unbiased beliefs, so finding pure facts is super important for forming an opinion. Try straying away from your friends, family, or guardians opinions if you are trying to create opinions based purely based on your personal beliefs.

The amazing part about being an American is that you have the freedom to practice religion, believe in whatever political party, and no one of a higher rank will punish you for it. So, with that being said, create your own opinions purely based on what you believe is right and what is wrong. Being underage should never stop you from expressing your voice from a political standpoint. Be bold, be strong, and get involved.