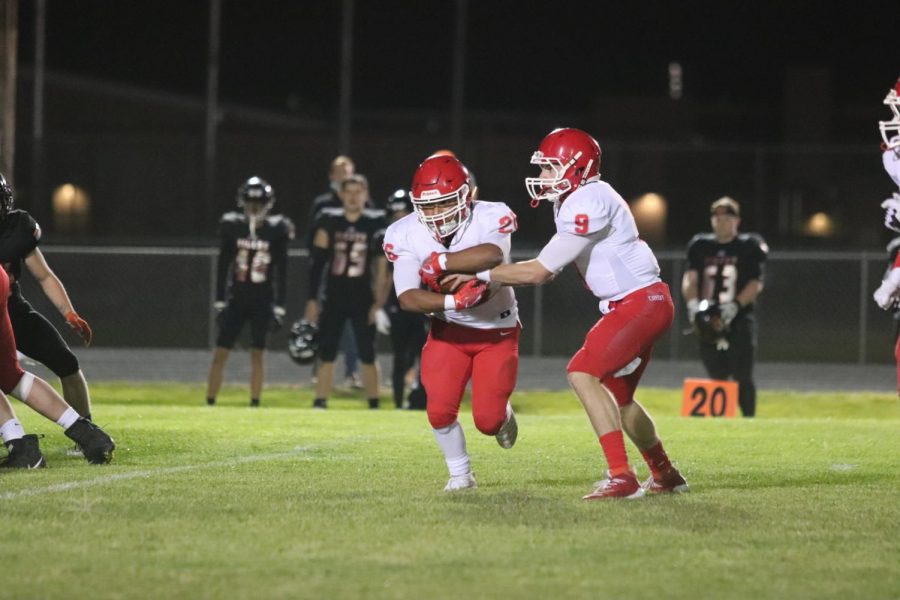 Reds football headed to Sterling for the second game of the 2020 season.  The rollercoaster of a game left the Reds with a 14-10 loss to last year’s 2A state champions.  Eaton fought to hold their ground and earn ground, but by the end of the night, it wasn’t enough for the Reds to walk away with a victory.

Last week, for Eaton’s season opener, the Reds overcame Weld Central’s Rebels with a 49-6 victory on their own field.  Eaton earned 42 points in the first half and seven in the second half against the Rebels.

The Reds led the first quarter against Sterling with a field goal by Jose Lopez (22).  By half time, the Reds were down 14-3. Walking on the field for the third quarter, Eaton regained focus and senior quarterback Grable was able to score a touchdown bringing them to 14-10, which didn’t waver in the last quarter.

The 2020 football season has been different for the Reds between the smoke, masks, and few fans that are allowed to watch, so the game felt different than normal. “I haven’t been able to give normal pregame hype speeches this year since we don’t go into the locker room,” head coach Zac Lemon said.

The battle was close between the Reds and the Tigers – just like it is every year against this rival of the Reds. During the fourth quarter, both teams raced back and forth down the field, but with strong offenses and defenses battling each other, neither side was able to reach an endzone. Sterling is currently ranked second in 2A football, while Eaton is ranked fourth.

Dirk Duncan (22) said the highlight of the game for him was, “playing with my brothers, and, yes we lost, but for the most part we stuck together and fought back.”  Duncan made one interception for the Reds and made six tackles.

Leading the team with 11 tackles is senior player Maravilla followed by Florez with 10, Zane Renner (21) with eight, Morgan Tribbett (23) with seven, and Duncan’s six.

“Being able to come back after half time and being able to put together a very good drive and punching it in the end zone just really brought the energy and our confidence up,” Maravilla said.  Along with Maravilla’s 11 tackles, he also received eight yards for the Reds.

Seniors Lampe and Gage Butler (21) led the Reds in receiving yards.  Lampe gained 38 yards for the Reds and Butler gained 27.  In total, the Reds gained 77 yards from receiving and 226 yards in rushing.

Grable earned the most rushing yards for the Reds with 96 yards total.  Rojas followed with 75 yards and Florez with 55 yards.

Coach Lemon said, “We know how talented we are, but we still need to improve our teamwork, trust, and competitive drive.  Each week we need to be better than the week before.”

Next week, the Reds will battle 38th ranked Fort Lupton on Oct. 22. Eaton will play the Blue Devils for their homecoming game.

Following Fort Lupton, Eaton will play at Brush on Oct. 30, at Severance on Nov. 6, and lastly will play Platte Valley at home on Nov. 14.

The Reds had a tough game, but they fought with the resilience and strength of an Eaton Fightin’ Red.  Even though games are different this year, the Reds still work hard and take the field ready to tackle the challenge in front of them.