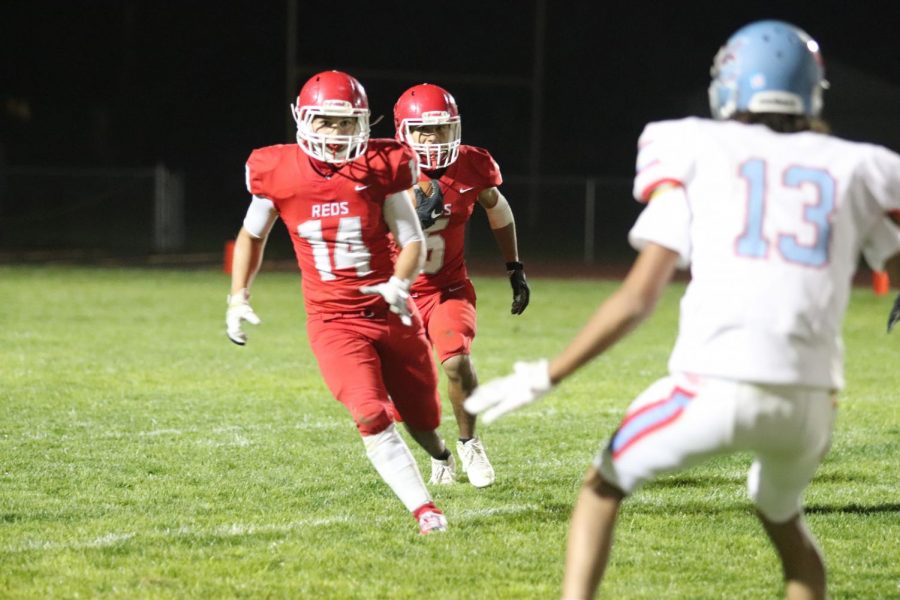 COVID-19 can’t stop the Red’s football team from making an appearance for the Friday night lights the community missed so much.  Eaton High School’s Football team had their 2020 season debut against Weld Central on Friday, October 9.  Through the team’s hard and great performance, the Red’s started the season off with a huge victory over Weld Central.

Eaton started the game fighting against the Rebels, gaining a touchdown by quarterback Scott Grable (21) within the first few minutes of the game.  The Reds kept up the pace throughout the night, earning them 14 points in the first quarter, 28 points in the second, and 7 points in the third. Leaving the Reds with a 49 point victory over Weld Central’s 6 points.

“We were all on the same page.  Everyone was focused in and had minimal mistakes” Ethan Florez (22) said.  Florez led the Reds in touchdowns scoring 12 points for Eaton.

“I think the highlight of the game was just being out there with my brothers because there’s nothing better than Friday night lights” Rojas said.  Along with scoring a touchdown for the Reds, Rojas led in kickoff and punt returns gaining 38 yards and leading in interceptions with a 25 yard gain against Weld Central.

To back the Red’s strong offense, the defense kept the Rebels from advancing the ball down the field.  Morgan Tribbett (23) led the Reds in tackles with eight total, followed by Tanner True (21) with seven, Ryan Dirksen (22) with five, and Maravilla with five.

Head Coach Zac Lemon said his favorite part of being a football coach is “watching the excitement of players when they make a big accomplishment or have an exciting play.  It is so rewarding to watch a player’s hard work in practice and in the off season come to light in a game.”

The Reds will be travelling to face their next opponent, Sterling, on Friday, October 16.  The Eaton Fightin’ Reds demonstrated that not even a global pandemic can slow down their rhythm when it comes to running a football down the field.  The Reds are ready to show what they can accomplish together next week against Sterling.