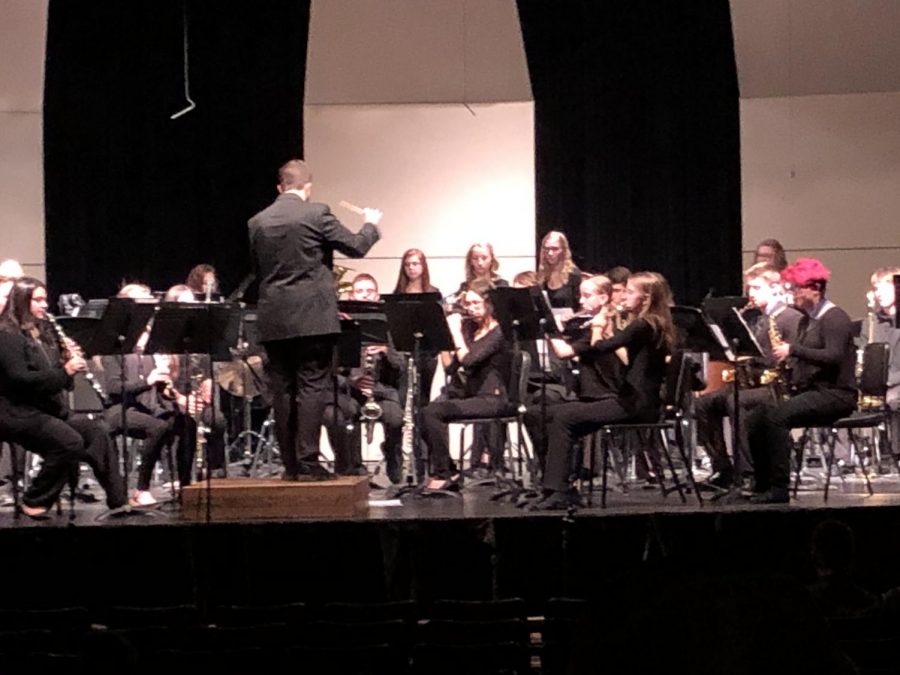 Eaton High School’s band performed a skillful concert, conducted by band instructor Logan Doddridge on March 10.
For the seniors, they performed the last spring concert of their high school career.
Many of these students have participated in band since middle school and continued to hone their skills throughout high school.
The band program has shown immense growth this year. The spring concert showcased the passion Eaton’s musicians experience daily.
Doddridge not only teaches five band classes, he also teaches music theory and History of Rock-n-roll as well.
Doddridge says he enjoys introducing young adults to his passion, and helps others find their passion in music.
Jonathan Brantner (21) is one such passionate musician in the EHS band program.
Brantner took music theory which introduced him to the composition of music. “My love for music has kept me interested in learning more about the ways to create music throughout middle school and now high school,” Brantner said.
Brantner’s passion for music began at a young age, creating an unconditional love and escape from the tribulations of high school life. He said it’s important to be involved in extracurricular activities that drive students to become better members of society.
The connections students make with leaders teaches independence, determination, and good work ethic. Band does just that.
Colton Sell (20) said, “Band shaped me as a person. It allowed me to come out of my shell and develop confidence.
I’ve had the opportunity to work with, and learn from, a lot of people in my four years here; I’m a better person because of band”.
Members of the community attend band concerts to listen and watch students grow as
performers from freshman to senior year. What starts out as the difficult task of making sound come out of their instrument, results in an enjoyable expression of art.
Along the way, band students have learned to support each other as they grow. Abby Whitaker (22) said, “Every time you perform, it’s going to be a bit different from the last time.
I’m really proud of what we put on stage. It’s really nice having peers that are supportive and forgiving.”
As students prepare for concerts and performances, their nerves build and distract them. Doddridge makes certain his students know the reason they’re taking the stage.
Doddridge said, “The only thing you can do, and know you have to do in this moment is to go out and create a moment that we will remember forever.”
The Symphonic Band achieved a new accomplish- ment for Eaton High School after CBA Regionals on March
4 by qualifying for Colorado Bandmasters Assosiation State Competition. Sell said, “It was a huge honor to hear the news. In a year full of broken records and history in the band world, it’s hard to appreciate how great this truly is.
Sell said he believes it is one of the greatest things Eaton’s band has ever been able to do. “Over the last four years I’ve seen this program develop so much. It’s great to see the hard work of Doddridge and the students pay off after all this time.”
After the marching band won a State title in November for the first time ever, this year has been a successful year for Eaton High School’s band. Monique Santos (20) said, “I’m crazy proud. It’s the first band ever at the school to qualify for state. We earned the highest score ever.” Santos has been a member of Symphonic Band for two years. She was a junior when the higher-level concert band was created. Santos said, “I am excited because it’s my senior year.
Symphonic band has never qualified for state before; and only three small schools get chosen. I’m excited too because we won state for marching band”.
Unfortunately remaining band festivals and competitons have been postponed or cancelled due to the COVID-19 outbreak.
Sell said, “It’s a huge bummer that we’ll miss out on our performances but this year has been great.
I’m insanely proud of this program. They’ve worked harder and accomplished more this year than in the past three years combined.
I know the bands and students within them are going to continue to succeed when we resume school.
I see the drive in the under classmen, and it brings me a lot of comfort knowing the band will be in good hands once the seniors leave”. Regardless of what the rest of the year looks like for band, the historical achievements of the band still stand.