After first meet, girls swimming determined to do better 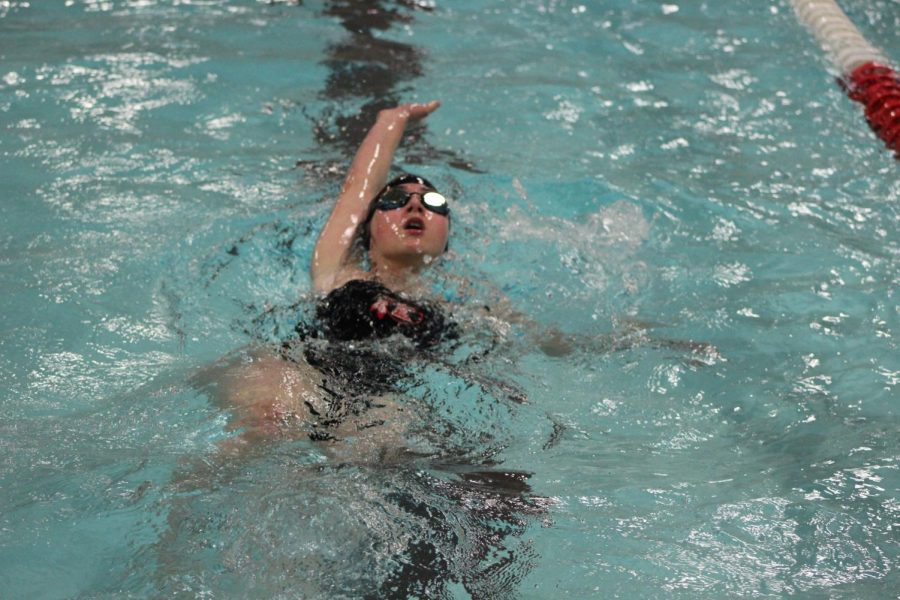 After losing 86 to 106 against Liberty Common, the swimmers now know what to expect from swim meets and hopefully will use it to be better prepared for the future.  The loss has made the girls ready to better themselves before the next competition which will be held on December 5.

Even with the disappointing end result, Coach Hattie Carlson said she was especially proud of the Lady Reds after the meet on December 3. Carlson explained how she tasked the swimmers to overcome more difficult races and relays than they were used to, but they all came through and swam the best they could throughout the entire meet. “I think overall it was a really great meet. I know we were really close. We competed with them well, and the girls really stepped up where they needed to and I was very happy with the result,” she said.

Eaton placed first in both heats for 200 yard freestyle, second heat 50 yard freestyle, and second heat 100 yard freestyle. And the team places second in ten other races. Lexi Bruntz (22) contributed to two of the four first place races, ending the meet with a state-worthy time of 2:15.34 during the 200 yard freestyle. Bruntz said she was very proud of the team and what they accomplished during the races. She said, “I think this met set a good example for the rest of the year. I think every girl gave it their all and we all did a really good job, especially for the first meet of the season,” she said.

Mackenna Dalton (21) competed in three races during the Tuesday night meet, placing second three times and fourth once. Dalton, and the other swimmers, all felt the exhaustion after the challenging races. She said, “These events are hard, and for most people they don’t seem hard, but to get through these meets, and to put your body through so much strain, it’s such a good feeling to know you did your best.”