Production students give the inside ‘scoop’

Juniors Sell and Mongan prepare to take on big roles 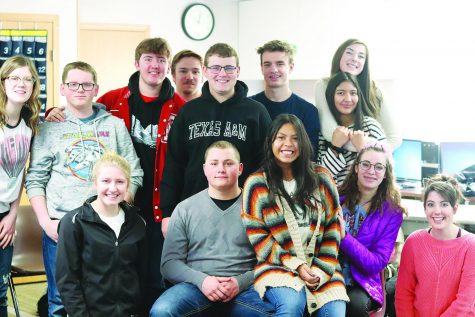 After the success of last year’s dinner show, Death of the Hot Sauce Salesman, Eaton’s Production team is returning with a dinner show this season. Save Our Scoops is a melodrama regarding the Brickle family who owns a local ice cream shop. When they are about to be evicted by their landlord, he will only give their home back in exchange for the hand of their daughter. Production’s six seniors will be directing the show along with Kendra Hixon, the theatrical arts teacher. Janae Jarnagin (19), one of the directors, said, “We are trying to do something on a bigger scale to reach more of our community.”

Hixon’s role throughout planning for the show is supervising accompanied by making sure the actors have anything they need. She said, “The show was well received by many, so I am excited to see how well it will do this year. We know what to expect a little bit better.”

Main characters include Makenna Dalton (21) and Everet Slaugenhaupt (20) who will pair up to play Mama and Papa Brickle. Grace Smith (21), will play Sherry Bert, the daughter. Colten Sell (20), is excited to play the hero persona, Walter Melon Cream. Sell said, “This is my first semester in production. I came in expecting to be an extra, so to be the hero, it is way out of my mind, I cannot believe it.” Sell said his favorite part of his character is his helpful, caring nature.

Thomas Mongan (20) will play the villain role of I.C. Freeze and said he is excited to be the opposing character. Mongan said he likes, “playing parts that are kind of hard to play because it gives me opportunities to become a better actor. I am excited to create this new type of character that I have never been before and acting like a different person.” Cream and Freeze will battle it out for the Brickle family on March 15 at 6 p.m.  The Catering II class will cook and serve along with various donors. The Production team plans on emphasizing ice cream as the dessert, complimenting the dinner show’s theme. Tickets are available through the front office or Hixon before the show, but they will be limited the night of the show.